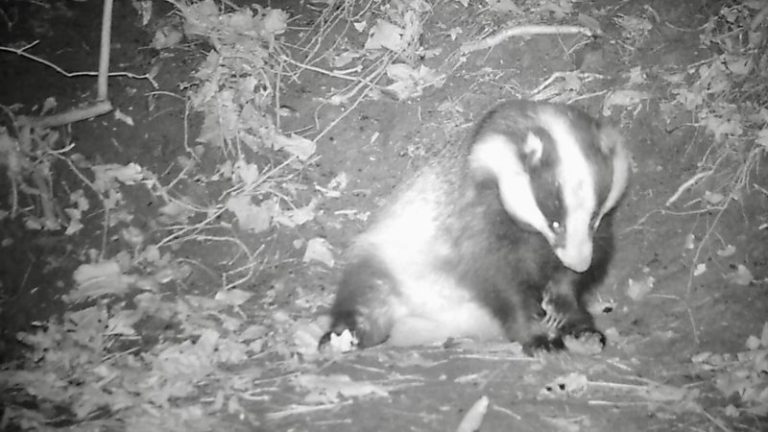 One day we went into the woods searching for a ball and found one buried deep into the undergrowth. Next to the ball was a very large badger sett. (A badger sett is a group of holes leading to the badgers’ den – home). We thought this would be a great opportunity to test out our wildlife camera that we had recently purchased. At the beginning of the week, we set up the trail camera on a trail leading to the sett that the inhabitants of the woods had clearly been using throughout the night. We left it here for a week or so in hopes we would get a glimpse of the creatures that called this forest home. The camera was sensing animals too far down the trail for us to see in the photos, so we decided to move it to a tree outside the badger sett, close to the trail. This would lessen the likely hood of us capturing deer and other species but would ensure that we got shots of badgers. Here 3 runs lead to different holes.

During the first night we captured a cat from the farm nearby and some badgers on their adventures. We left the camera here for a couple weeks and checked it every day. Every so often we downloaded the photos onto our computer, so we didn’t lose them to the camera recording over them. Some of the best captures was a fox checking out the badgers’ homes and the badgers grooming themselves and cuddling with each other.