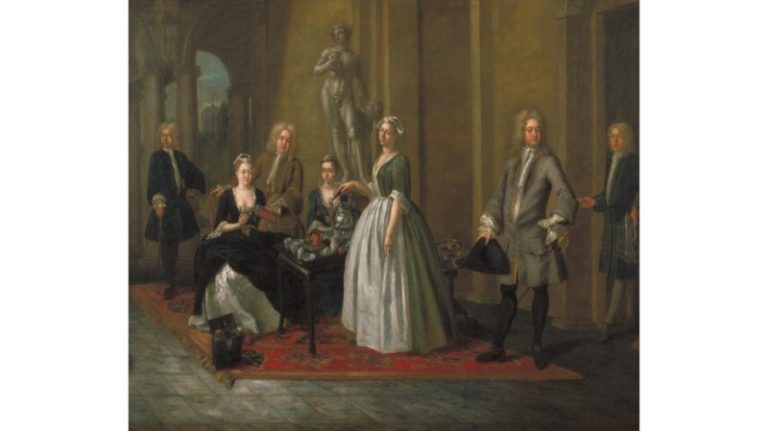 Having addressed the issue of the very volatile politics of the time associated with the Jacobite rebellions which at times came close to toppling the Hanoverian regime, Year 8 pupils have turned their attention to the social and cultural history of the Georgian Age.

This was the age of great literary figures, Swift, Pope, Goldsmith and not forgetting Dr Johnson and his famous dictionary. It was the time of the great actor-manager David Garrick and composers including Haydn, Handel Mozart and Beethoven. It witnessed the work of some of the greatest British artists, Gainsborough Reynolds, Romney and Turner.

However, it is evident from their studies that many pupils were mostly intrigued by the sudden vogue for fashionable tea parties! Sad to say a number of our Year 8 pupils were rather disconcerted to learn that we must always put the milk in before the tea in the proper traditional Georgian manner!

Our Spanish visitors were equally disconcerted, finding the full idea of tea in milk a little peculiar. Our short stay Spanish visitors have been a welcome addition to many of our History and Religious Education classes and have thrown themselves enthusiastically into their studies, joining in with discussions and asking questions.

Studying alongside our pupils in year 7 as well as 8, they have acquired a considerable knowledge of Britain’s history and in particular, the social and cultural history of the Georgian Age including how Britain acquired a new ruling dynasty whose first language was not even English and how the first of these rulers preferred spending time in Hanover rather than England! They have also learnt about some of Britain’s greatest artists and how they depicted the important people of the time, from kings like the four fat Georges to fashionable ladies and gentleman like Mr and Mrs Hallet in the “morning walk” by Thomas Gainsborough. Our topics also included the fashions of the age giving all of our students the historical knowledge to begin to understand why the British are still regarded as great tea drinkers today!