Duke of Edinburgh Preparations Underway The Hills Are Alive 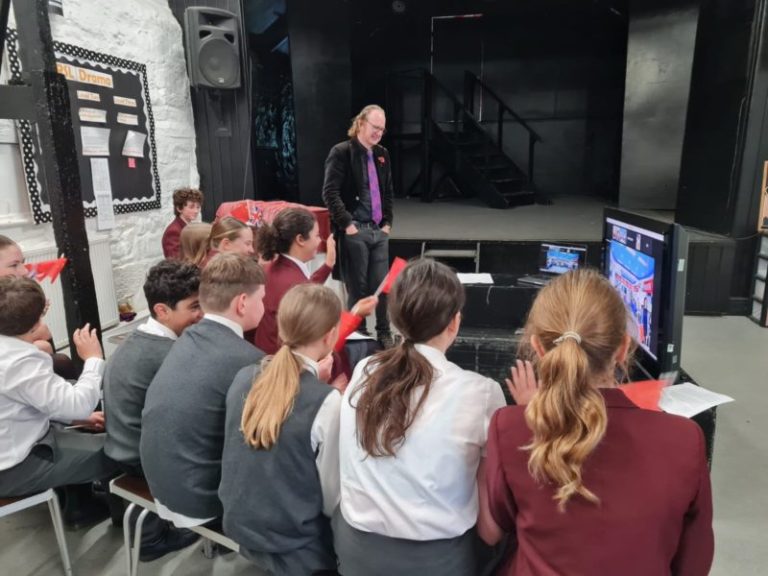 Last week 8P took part in a Chinese drama exchange lesson with our partner school in China. The aim was to share the cultural importance drama has in both of our countries and schools. Our students performed a melodrama and students from Guanghua Experimental School in Chengdu, China performed Sichuan opera, a Chinese traditional opera. I was very impressed, they were very good! The actual lesson took place on zoom so we could all see and hear each other.  Both classes made a presentation to introduce the style of drama they would be doing and there were a few speeches by Mr Allen and a teacher from the Chinese school too. We painted masks, asked questions, watched each other’s plays and had a lot of fun.

What was your role and how did you prepare?

The class split into groups, some people took performance roles, some were in charge of lighting, cameras, staging or props. Everyone in the class took one some role and worked as part of a team. My role was to play a man called Sir Jasper who is a villain. We practised our scenes on stage a lot, especially my fight scene with Bel which we had to get right or it would look silly. (Eve)

My favourite part of the preparation was learning to use the camera. It was surprisingly easy despite its intimidating look. Since I wasn’t performing on stage I took on the role of camera person which was really fun. (Tess)

My role was Mr Neemo in the performance and it was really fun because I love performing on stage. My favourite part of the preparation for the exchange lesson was when we got to practice for the whole afternoon instead of doing our other lessons. It took us quite a while to prepare as we wanted it to be really good. (Faith)

I had many favourite parts of doing the preparation for the lesson but my favourite was the first performance after learning my lines it was so fun to do and everyone had a good time. I don’t think it took very long to prepare, maybe about a month. We prepared in break time rehearsals and in our lessons.  (Bonnie)

Would you like to take part in another exchange lesson?

I would like to do another exchange lesson because it shows you about Chinese history and types of drama and I also like to see what other countries are like and how they view things. (Henry)

I would LOVE to do the next exchange lesson as I had a great time, I love drama and it is great experience! (Bonnie)

My favourite part of the exchange lesson was speaking my lines and watching their performance. To add onto the list of things I enjoyed asking questions at the end was very entertaining since we voted Daniel as popular the students saw him as an icon.  I would definitely like to participate into the next exchange because it was very fun practicing and being in that environment. (Florence)

My favourite part was when I ended up becoming an international superstar when one of them asked who the prettiest girl in the class was and I was chosen and by the end they were screaming that they loved me! Of all the ways a drama collaboration could have gone wrong I didn’t think that would have been one of them! I would definitely like to take part in the play next time though as it would be a great experience and maybe even a once in a lifetime opportunity. (Daniel)