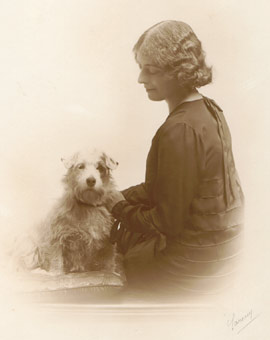 … was Mab Bradley, the ‘merrily brilliant’ young woman who founded the school in 1923. A ‘born teacher’ who ‘always made you feel the world was bigger than you knew’, she was described in later years as a ‘fountain of intelligence and humanitarian wisdom’, with ‘a presence that commanded instant respect while, at the same time, being one’s ideal of a granny’.
It has long since become part of Fyling Hall legend that this remarkable woman was inspired to found a school after attending a dinner party in London. Hearing of a small and sickly boy, she offered tuition in bracing Yorkshire air. He would go on to win the top scholarship to Winchester. But with him and just three other boys, the school that was to become Fyling Hall sprang – almost accidentally – into being.
Mab’s daughter, Clare White, and former pupils and staff remember the founder. 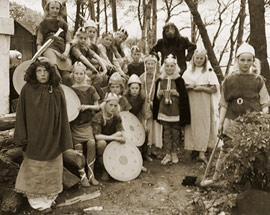 ‘Finer or more healthy surroundings for a school are not to be found in England.’ So claimed the first prospectus for Fyling Hall, printed in the mid-1930’s. ‘The Grounds are laid out in terraces which provide admirable sites for outdoor Classes, Dancing, Plays, and other Performances.’ Thus, the alfresco production pictured here – ‘The Winter’s Tale’, perhaps, given the lurking bear? Several pupils from these early days have recorded their memories of school life for ‘Fyling Tales’, and a selection is reproduced here. 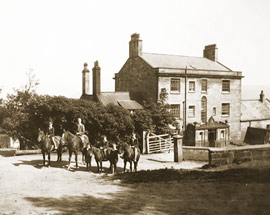 The Great Trek
In 1940, the school was evacuated to Inglewood Bank near Penrith. Just as well, perhaps, since a large bomb dropped in the woods two days later. While the pupils travelled in buses, however, petrol rationing did not allow for the transportation of horses. A former pupil, Bob Dawson, was working as riding master in exchange for the Latin tuition he needed to qualify as Articled Clerk to the Town Clerk of Scarborough. With the brash optimism of a teenager, he offered to trek the school ponies over the Pennines to rejoin the children. His account of the adventure, abridged here, was published in Fyling Tales in 1990. 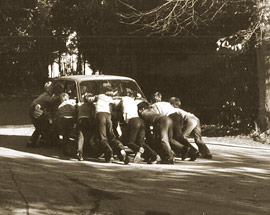 ‘Children were living in Spartan conditions. The school would totally have confounded the Health & Safety pundits of today. We had no mains electricity; no mains water (delicious spring water from our own reservoir, but probably laced with politically incorrect particles) and frightful concrete showers and loos (known affectionately as ‘Bog End’), while a long railway carriage in the garden served as a senior boys dorm.’ 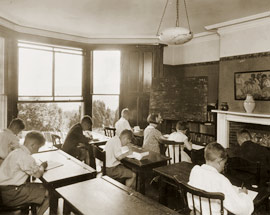