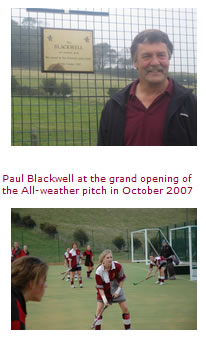 After two years of fund-raising, including the Great Trek to Cumbria our all-weather pitch was declared open on the 7th October 2007, on time and on budget. This was no small achievement, considering both the difficulties of Fyling Hall’s hillside terrain and the fact that work began when weathermen were forecasting the wettest summer in recorded history. After enduring many a long muddy winter, our hockey players in particular are now revelling in the flat, dry, springy playing surface. The pitch is named after long-serving games master, coach and former Head of Sport, Paul Blackwell.