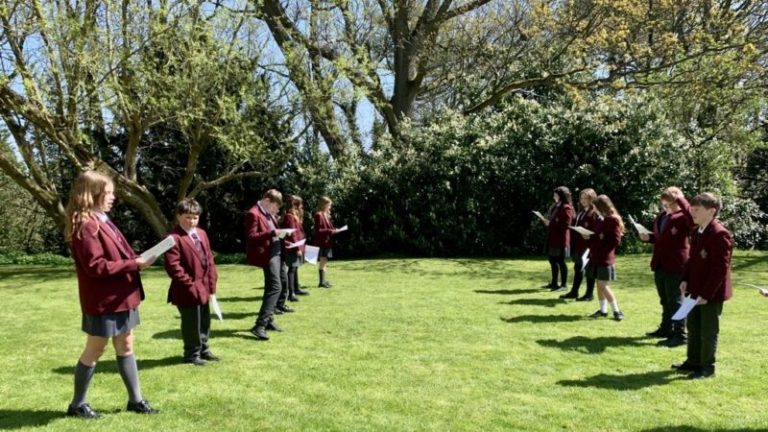 Mrs Milner’s Year 7 students are celebrating their first year in secondary school, having had an extremely busy first year at Fyling Hall School. In their final term at school, they have worked on a writing project in which they had to create a ‘space journal’ about being lost in space, they have studied sections of Shakespeare’s ‘Macbeth’, and are currently working on learning poems for the annual Daisy Hardy competition.  Phew!

The space journal was based around the premise of pupils imagining they were astronauts manning a rocket which then developed a fault and crashed onto a planet in outer space. The pupils were tasked with various different fiction and non-fiction writing activities related to this theme.

For example, pupils were asked to do tasks like write diary entries about their travels as if they were astronauts, use their creative writing skills to describe the strange and wonderful new planet, and write a newspaper front page article about the accident to list just a few.

Because they were all so good, Mrs Milner then turned the project into a competition. The winner and runner up are to be announced in the final assembly.

After that, students took a vote and all decided that the next unit to be studied should be on ‘Macbeth’. The class set about analysing the first scenes and then had a choice of different prep activities to complete over the June half term. Mrs Milner’s personal favourites were of Bonnie’s family enacting one of the scenes including the witches, and Eve’s dogs similarly trying to bewitch the audience. Take a look at the video. I’m sure you’ll agree Bonnie’s mum and Eve’s dogs should be nominated for the next Oscar awards!

Year 7 students are now learning their Daisy Hardy poem in order to recite this during the last week of term during activities week. The idea is that students learn the poem off by heart and are judged on how well they recite it. This competition has been running for a number of years and is a famous Fyling Hall tradition. Take a look at some of the pupils learning their lines in the sunshine.

I have to say I have been impressed by how hard-working and enthusiastic my Year 7 class have all been and look forward to another fun-filled time in Year 8! It’s been a joy celebrating their first year in secondary school!

Enjoy the summer, everyone!