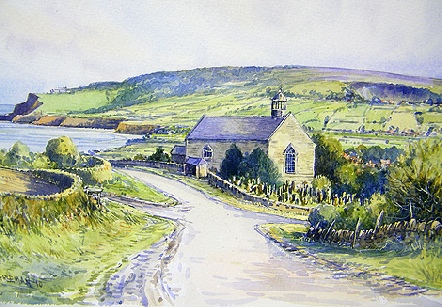 Old St Stephen’s (aka Raw Church) will be a familiar sight to Fyling Hallers past and present, whether as a milestone on the Senior Cross run, the spot for spooky midnight walkabouts or as the setting for the annual Harvest Festival. We’ve even heard tales of students visiting the abandoned building in the 1960s being overwhelmed and fainting; needless to say, the air circulation is much better these days.

What you might not know is that there is a much longer historical connection between the church and Fyling Hall. Without wealthy ship builder John Barry, there wouldn’t have been a school or a church at all. After buying the manor of Fylingdales in 1819, he built Fyling Hall (then called Park Gate). The parish church was falling into disrepair and required rebuilding, so in stepped benefactor John Barry who, alongside the Incorporated Church Building Society, donated £886 and enabled the current church to be opened in 1822.

The Barry family made a significant contribution to the area especially to local architecture. Several decades later, John’s son Robert financed the building of the new St Stephen’s church in Fylingthorpe where Fyling Hall’s students worship today. His grandson John (Squire Barry) built his pigs a luxurious pigsty in the style of a classical temple, which you can see from the road just past the Junior School. Fyling Hall has always had strong roots in the community and still does today.

Old St Stephen’s is celebrating its 200th birthday this year. The local community wants to give the church its voice back by restoring and re-hanging the ancient bell which, until recently, rang out for hundreds of years over the Dale. We hope that members of the Fyling Hall community consider following in the Barry family footsteps by making a donation to the crowdfunding appeal.

You can find out more here about the #OneSmallBell appeal here:

The Friends of Old St Stephen’s